APG|SGA is installing 120 TrafficMediaScreens (TMS) in 81 vehicles belonging to TPL (Trasporti Pubblici Luganesi SA), under its exclusive partnership with the company. The deal means APG|SGA now operates the largest digital network in Ticino and has further strengthened its position as the leading provider of transport advertising nationally.

TPL, the public transport provider for the Lugano region, carries more than 13.7 million passengers a year. It operates 15 routes that connect the city centre with the various surrounding districts. The 120 new screens have been placed in optimal positions in the company’s buses. The left-hand side of the screen displays routes, stops and connections, and the right-hand side offers the option of placing 80 seconds of advertising in a 120-second loop. The remaining 40 seconds are reserved for news and weather reports. Thus, passengers are offered an interesting programme mix of information, entertainment and advertising.

Together with the 12 City ePanels and four Rail ePanels already operated by APG|SGA in Lugano, all of which are installed in prime locations in the railway station and city centre, the 120 new TMS comprise an attractive and exclusive digital package for advertisers in Ticino. Spaces can be booked individually or in combination. Currently, the City ePanels and Rail ePanels can be targeted programmatically.

The TMS are available from 21 June for transmission starting from 2 August 2021 and can be booked effortlessly on APG|SGA easy. A full-week campaign across all 120 screens costs CHF 1,700, with around 4,000 plays. APG|SGA is offering an introductory discount of 20% on bookings made before the end of August.

Information
Factsheet on the offering 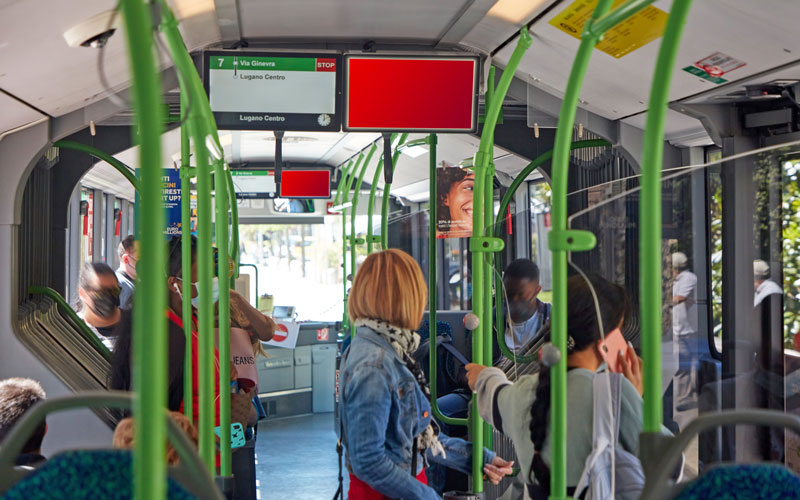